When taking a look at the hardware, I didn't see the typical components I expected to see for 802.3af/at PoE support (negotiation chip, transformer), so I was curious how can it support "the real POE".

When cAP lite was connected to 802.3af/at switch, it did not power on, so I assume this is a mistake in the product description? Or am I missing something and it should be working?
Top

I have a setup with TP-Link TL-SG105PE, which is an 802.3af/at compatible device, powering SXT LTE6, cAP AC and cAP Lite.
So it works.

Are you sure the port you connected it to was setup to provide power ?
Top

wAP ac connected to the same port/cable powered up correctly.

According to spec it supports 802.3af/at but it cannot be ruled out that an earlier hardware revision does not (and supports only passive PoE).
Of course you can still power it via the ethernet cable using the supplied PoE inserter and plugpack.
Recently I plugged a wAP (of similar vintage) into an 802.3af/at switch and I was surprised that it works. Before I had used the PoE inserter and plugpack but when I moved it, it ended up directly on the switch and it still worked

That first one is a MAP LITE.
That's something else (though Hw/capability wise should be more or less the same) 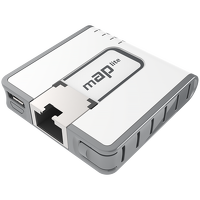 Probably just the same PCBA is used in both products.
Top

Probably just the same PCBA is used in both products.

Just compared the specs of those devices. Could indeed be the case.
But something is wrong there with those specs. Map Lite is listed as not having USB powering option which it certainly has. I have 2 in front of me and that's more or less the only way I power those !

And I never noticed cAP Lite should have it according to specs (why would it ??).

Anyhow, I know that mAP Lite can also be powered using 802.3af/at (at least the ones I have).
And passive PoE as well.
Top

I use cAP lite with normal PoE switch, no problem. I had 1 out of ~15 faulty/dead, and another had dodgy ethernet. Apart from that they worked OK.
Top

Downgrade version 6.48.6 or earlier. I did a lot of tests with various switches and indeed after uploading the newer version of MAP Lite it does not run via POE-in. Only going back to the older versions fixes the problem and everything works as it should.
Top

Downgrade version 6.48.6 or earlier. I did a lot of tests with various switches and indeed after uploading the newer version of MAP Lite it does not run via POE-in. Only going back to the older versions fixes the problem and everything works as it should.

Hi,
I have the same issue with POE not powering on a bunch of brand new CAP Lites. Did you happen to find a solution other that downgrading below 6.48.6?
Top
Post Reply

Users browsing this forum: No registered users and 6 guests